With or without poles

What's the best way for children to learn how to ski?
©
McKINLEY

Marietta Hoffmann
More about the author

Do you want your little ones to hit the slopes for the first time? That's great! But before your child attempts their first turns, you'll probably have a few questions. What is the best way for children to learn how to ski? Do they need ski poles right from the beginning? Or is it better if they start their "skiing career" without ski poles? In our article, we have compiled the most important answers for you.

From what age can you start skiing?

The good news for skiing-enthusiastic parents: You are never too young to start skiing! But of course, your child should already be able to stand on his or her feet. As a rule of thumb, that’s the case from around the age of three. The younger the child, the easier it is for them to learn new movements.

However – and most mums and dads can tell you a thing or two about this – children don't always want to do what their parents have planned for them. Just because your child is theoretically old enough to ski doesn't mean he or she will want to.

If your little one refuses to become the next Mikaela Shiffrin right away, it's better to start them a little later. The desire to ski is bound to come at some point – and until then, you can get your child excited about the snow by taking them tobogganing, for instance.

Professional children's ski lessons are a good alternative as well. Together with children of the same age, they often learn faster and have more fun.

By the way: You should wait a few years longer to start them on snowboarding. All the muscle groups your child needs for snowboarding are not fully developed until the age of six or seven. 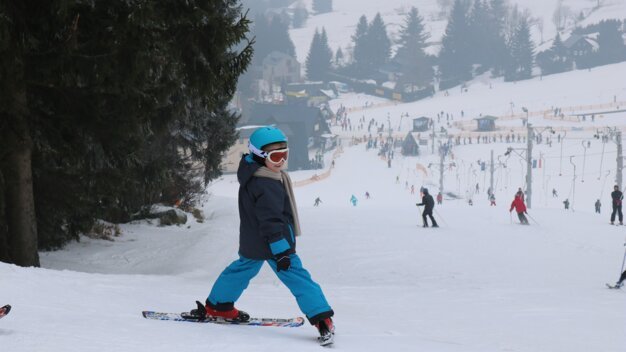 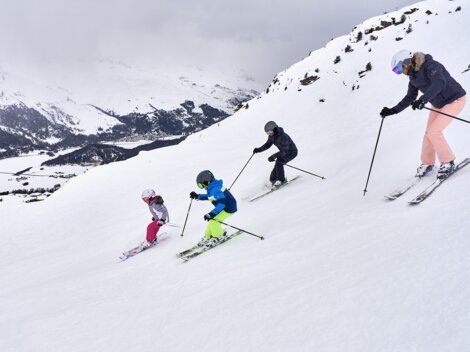 Should they start practising with or without poles?

Many kids find ski poles particularly fascinating. After all, Mum and Dad have two of these great, long poles too! However, poles are often a hindrance in the beginning. Standing on skis and focusing on the position of the feet usually works better without poles.

What is the right length of ski poles for children?

The right length of poles for children and adults depends on their height. You can use the following formula as a rough guideline:

Tip: Ski poles are available in length increments of five centimetres. If your child is between two sizes, choose the longer poles! To check whether they are long enough, hand your child the pole upside down and let them grab it just below the basket. If their forearm is parallel to the ground, the ski pole fits just right.

Alternatively, you can also have a look at this table: 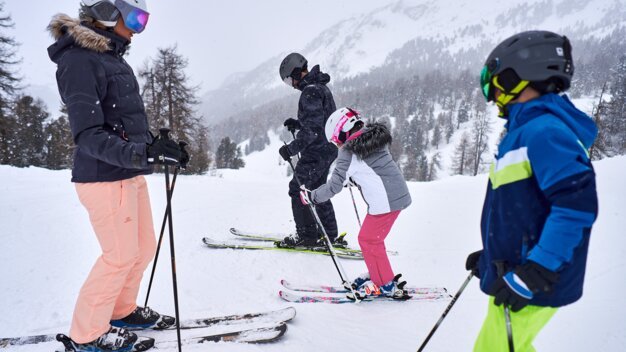 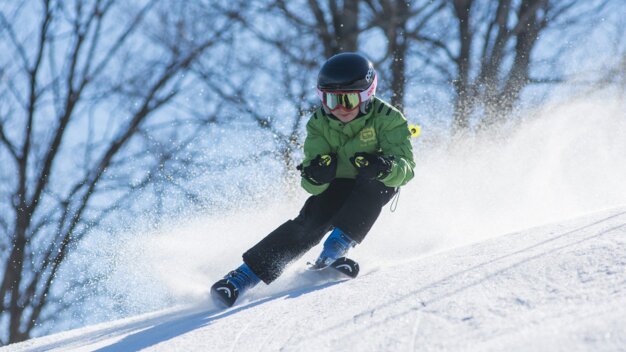 Are you and your child ready to hit the slopes for the first time? The best way to start is with a few simple exercises:

Pro tip: The most important thing when learning how to ski is to have fun. So motivate your child with lots and lots of praise and encouragement!

What equipment do children need for skiing?

To give your kids a head start, they need the right equipment! Make sure everything fits well and is of high quality! After all, nothing spoils the fun faster than cold feet or ski boots that pinch ...

Here’s what your child needs for skiing: 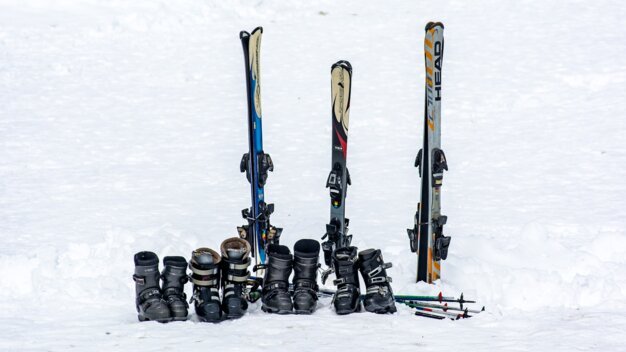 "Oh, they just grow up so fast!" And you’ll quickly notice that when last season’s ski gear doesn’t fit anymore. Be prepared that your child will outgrow their ski clothing in no time, and you will need new equipment every season!

But we’ve got great news for you: You can rent first-rate ski equipment for children at INTERSPORT Rent! Whether it's skis, poles, or helmets: Our RENTertainers will help you find the perfect gear for your child. 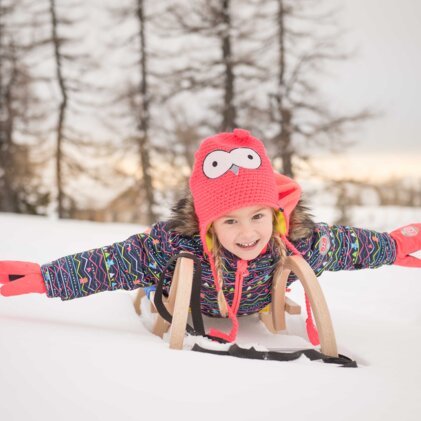 How to dress your kids for skiing

Marietta Hoffmann
The experts at INTERSPORT Rent explain what to look out for when dressing your kids for skiing. The secret: several layers. Read more!
Continue reading 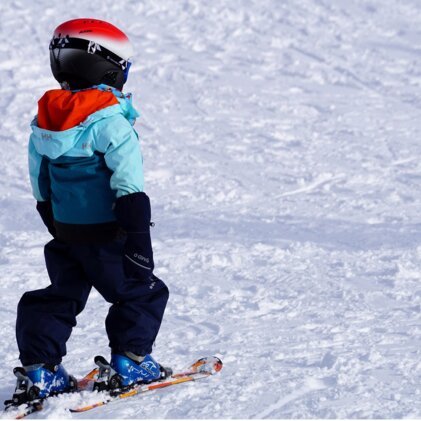 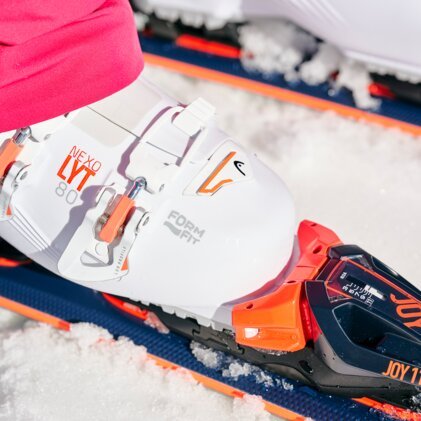 Marietta Hoffmann
How do I find the right size ski boots for my kids? Find out in the online magazine of INTERSPORT Rent – including size chart. Learn more!
Continue reading